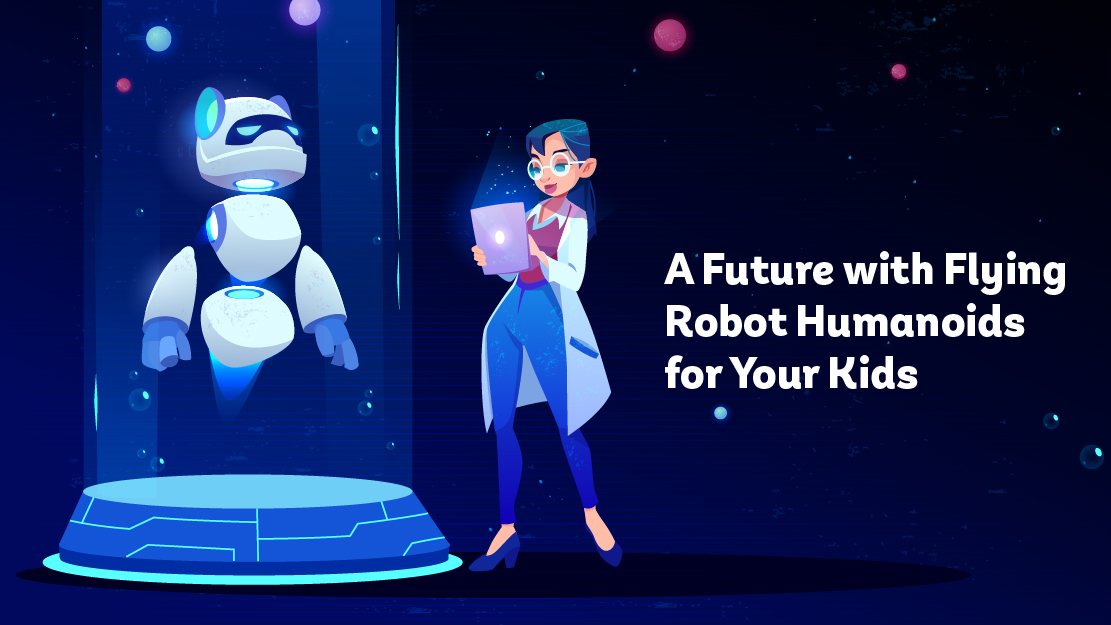 A Future with Flying Robot Humanoids for your Kids

Flying humanoids represents a new frontier in robotics and automation. An Italian group of researchers has been conducting experiments to investigate the possibility of creating flying robot humanoids. And, now they have a result to show for their effort. They like to call this field of study Aerial Humanoid Robotics.

When your kids grow up into adults, these flying robots are likely become a common sight. Research and development in this area are going on rapidly, and the efforts are not far away from bearing fruit.

What Flying Humanoids Will Do?

The current breed of humanoids can walk and can manipulate objects. So, designing a humanoid that can fly as well was just an extension of the capabilities instead of developing an entirely new robot design.

A flying robot humanoid’s primary purpose is to help search and rescue missions during disasters like earthquakes and floods. These robots can operate in challenging places which are dangerous and harder to reach for humans and carry out the search for survivors.

Once robots get flying abilities, they can navigate from one building to another in quick time, avoiding debris, fire and water. After landing and once inside the building, they can manipulate objects by opening doors, turning off gas valves and carrying out an inspection of the area to look for anyone needing immediate rescue.

The researchers at the Italian institute are working on introducing a framework that can estimate the intensity of thrust generated by the propellors with reliable accuracy, which makes objects fly in the air.

It isn’t easy to measure the thrust accurately and is currently measured using data collected by sensors on board the object. The new framework developed by Italian scientists can estimate thrust intensity without requiring sensors to be fitted on board. The new thrust estimation framework significantly reduces the cost of production and simplifies the flying robot design.

The first source used by the framework relies on the data collected by relating instructions sent to the jet engine with the thrust generated by the machines. For this, jet engines were fired up in safe fireproof environments, and input/output data were collected to develop a model of how the engine behaved.

The second source of information uses the centroidal momentum of the flying robot. Roboticists use the concept of centroidal momentum to control the robots’ movements. It can determine the relationship between a particular thrust level and the effects on the robot’s movement.

Both these sources have limitations when used in isolation. The first source would not provide accurate data if the engines were to function differently owing to environmental factors unrelated to the commands being sent. Similarly, the second method relies on the laws of physics instead of any internal information from the jet.

By combining both approaches, the individual drawbacks could be overcome. This framework works independently from the specific characteristics of flying robots.

The Italian researchers working on the aerial humanoid project unveiled the flying robot in early 2022 and named it iRoncub. The framework could be applied to humanoids and flying objects with different body structures.

This framework could be used to estimate thrusts in humanoid flying robots and in any other flying multibody robot. Testing the framework requires careful planning as jet engine temperatures can reach 700 degrees with airspeed at 1800km/hr. So, strict experimental protocols must be followed to work safely with the flying robot.

However, achieving the right thrust intensity is critical to the success of flying robots. If this mechanism is applied to other flying objects, it can open up vast possibilities for delivering food and medicines in remote locations. However, the current endeavour of scientists is to improve the efficiency of terrestrial and aerial locomotion.

Developing the capabilities of the robot is a long-term endeavour. Suppose this framework is further improved using AI and data analysis tools. In that case, this could be used to integrate better and control all of the flying robot’s movements, namely take-off, horizontal flying, landing, manipulation of objects, walking and running on the ground. However, researchers focus on the short-term objective of successful take-off and landing.

1.Since the flying humanoid has the appearance of a human body, it has a head comprising eyes, ears, a mouth, and a torso with hands and legs. Such human features make the flying robot humanoid very effective in interacting with humans. And they can be used to work in various environments.

2.Flying humanoids have autonomy and can be programmed to They can be tasked with executing dangerous missions such as rescue and recovery during disasters and space exploration.

3.A flying robot can be used for carrying out deliveries to customers at home. Their services can also be used to deliver essential items to remote places.

4.Flying humanoids can also have broad applications in defence. During wars, they can carry out reconnaissance and rescue missions to keep injured soldiers in difficult physical terrain. They can be used on battlefields in place of real soldiers, saving human lives, improving efficiency, and providing flexibility in terms of schedule as robots never get tired.

5.They can also be used for entertainment by performing stunts in the air and other amusing tasks such as singing and dancing.

The future of flying humanoids looks bright. Rapid advancement in robotic research and automation has raised the probability of phenomena such as Autonomous navigation becoming an everyday reality by the end of this decade. Passenger drones to fly people from one place to another are also expected to debut in this decade.

Your kids stare at the prospect of living in a world vastly different from the one we see now as adults. Machines with a fair degree of autonomy will be commonplace and integral to our society. At this moment, it doesnt seem to be something to be concerned about.