Skip to content
Home Blog Do Your Kids Possess These Traits for STEM Education? 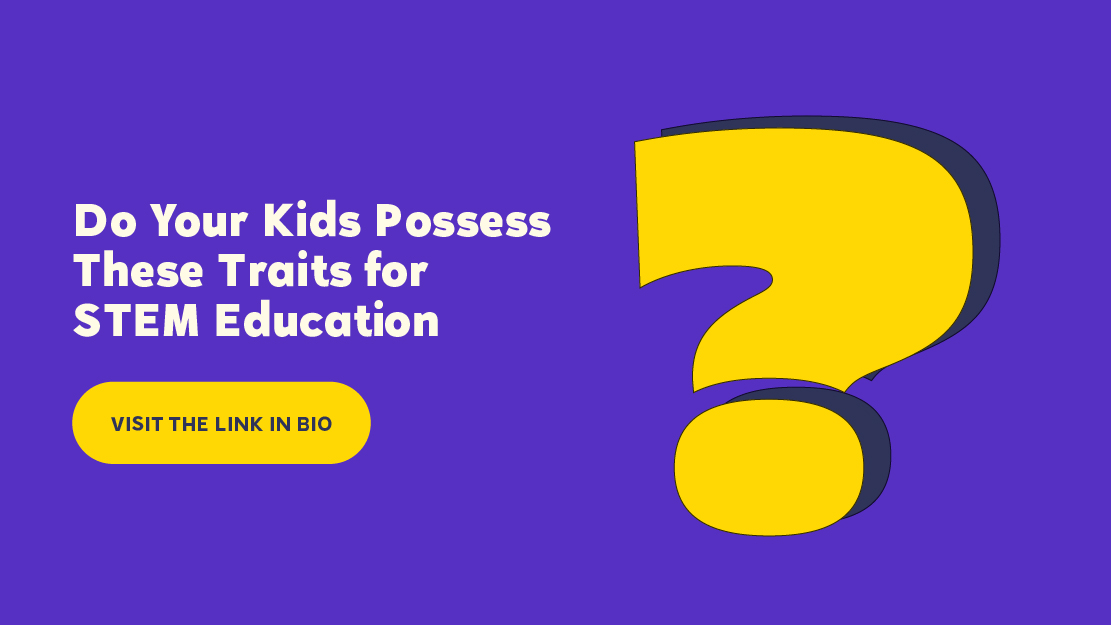 Do Your Kids Possess These Traits for STEM Education?

When you hear the word experiment, like most people, you may imagine scientists in white coats conducting experiments in a lab or famous inventors like Thomas Edison.

However, that’s a limited way of thinking about experiments. Innovating and experimenting also include trying out new experiences and disassembling products and processes in the quest for further information that could inspire a creative new idea.

It would help if your kids knew the broad scope of experimenting as it will come in handy in STEM education, robotics for kids and coding for kids.

Good experimenters know that while asking questions, watching, and networking can yield information about the past (what was) and the present (what is), experimentation is best suited for producing knowledge about what might be successful in the future.

In other words, it’s one of the best methods to respond to the hypothetical “what if” questions that arise when we look for fresh approaches. Running the experiment is often the only method to obtain the data required to proceed.

Experimenting is key to innovation, and every effort should be made to institutionalise it in kids’ learning environments.

The best experimenters are makers who create new products and entrepreneurs who launch new companies. One of the best ways that allow you to distinguish innovators from non-innovators is to see the presence of experimentation skills.

Therefore, assessing your child’s experimental talents is a fantastic place to start if you want them to develop a passion for creativity and invention.

Most innovators engage in at least one of following three forms of experimentation:

The first is exploring different things,and exposing oneself to diverse experiences, like Steve Jobs did when he visited India.

The second involves disassembling objects, literally or mentally, like Michael Dell did when he took a personal computer apart at the age of sixteen and then later on started Dell, where you can get an assembled PC of your choice.

The third involves piloting and prototyping an idea, a process many engineers follow when building new products. The prototypes are subsequently altered and improvised to get the best solution for the problem.

The last of the three strategies is the one we commonly connect with the phrase “experimenting.” Making a prototype to assess an idea’s viability is the traditional laboratory approach to experimenting.

However, a far broader definition of experimentation more accurately captures how innovators develop novel ideas. Let’s look at each of them in more detail.

1. Exploring and Trying Out New Experiences

One thing that stands out in Innovators and makers is the awareness that having various experiences enables you to think divergently since you may associate ideas from a broader range of sources.

As a parent, your aim should be to provide your kid with as diverse experiences as possible. The varied experience will boost your kid’s capacity to evaluate a problem from various perspectives and develop critical thinking needed for STEM fields of science, technology, engineering and mathematics, and robotics classes for kids.

It can work for adults as well. From a financial point of view, trying out new things could be useless, but it might make a considerable impact when looking for innovative ideas.

Discovery-driven innovators know that testing new things entails participating in interactive learning activities that might not immediately have practical applications. They operate under the assumption that the gaps will eventually close.

The often quoted instance is of Steve Jobs, who took a calligraphy course while in college because of a lack of interest in regular classes. This exposure to calligraphy would go on to influence the way Jobs designed the Macintosh.

Innovative thinkers intuitively realise the benefits of trying out novel experiences in unfamiliar settings. Living and working in diverse cultures is one of the most effective experiments innovators may do

Tinkering with objects by disassembling and taking them apart is common among makers and innovators. Do you see this tendency in your kid? Kids are natural tinkerers who like playing with objects. With a good robotics play kit and encouragement, you can stoke experimentation and creativity in your child.

Many innovators develop an inventive concept by dissecting something—a service, a system, a business, or a technology.

The first thing Michael Dell, another pioneer innovator and founder of Dell, did when he got an Apple II as a gift on his 16th birthday was to take it apart. He studied how it worked and realised the total cost of the individual components was far less than the cost of the computer.

And so the idea behind Dell was born. Michael Dell realised that he could purchase the most recent components, configure them in the precise way a customer desired, and deliver it for much less than a store’s retail price.

Experimenters prefer to break things down into parts to understand better how things work. They inquire when they disassemble an object and why it functions the way it does. It frequently sparks fresh concepts about how things may function more effectively.

Innovators understand how crucial it is to test prototypes and pilot programmes to see what can be discovered. It’s an integral part of the engineering design process where engineers build a model and then frequently revise it until a satisfactory output that meets the desired specifications is produced.

Due to their propensity for action, innovators frequently launch new products or businesses as soon as possible, almost as an experiment to see how the market will react. They enjoy slamming fresh ideas for products, procedures, and companies against the wall to see what sticks.

While some inventors tend to introduce their prototypes to the market hastily, others meticulously test and evaluate rival prototypes to determine which one performs the best.

While developing the experimenter’s qualities in your kid is undoubtedly helpful, it’s also essential to know that the amount of experimenting needed remains inversely proportional to the amount of inquiry, observation and networking done.

To put it in another way, kids will need to do more experiments to obtain the insights necessary to advance if they haven’t done much questioning, observing, or networking (or haven’t done them successfully).

The bottom line is that y to conduct fewer experiments, ask pertinent questions, pay attention to relevant circumstances, and converse with a wider variety of people. Experiments tend to become random when there is little information from inquiries, observations, and networking interactions. So, the experiments that are conducted after thorough questioning will be better planned to produce the data you require to move forward

Does Your Kid Possess These Paradoxical Traits of Creativity for STEM Education?