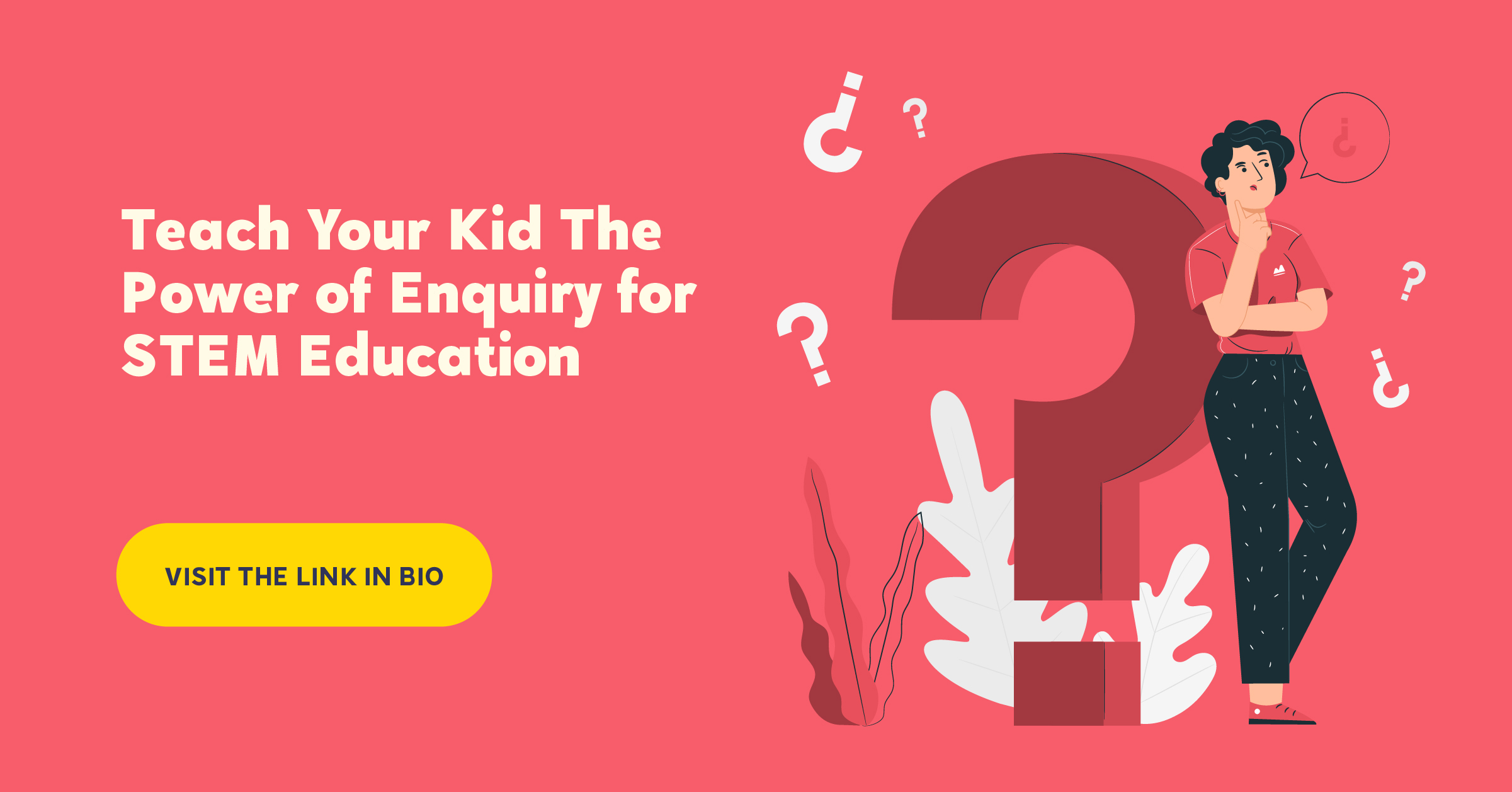 Give Your Kid The Power of Enquiry for STEM Education

For many leading innovators and creative minds, their most significant achievements could be linked to a question (or a set of questions) they had formulated and subsequently responded to. These questions are responsible for their ground-breaking discoveries, burgeoning start-up businesses, and the innovative fixes to vexing problems they had discovered. The power to question would also be useful for kids when they are getting into STEM education, coding for kids and robotics for kids.

Many educators agree that in an ideal learning environment, pupils must be able to create and ask insightful questions. Some are also aware that as complexity rises and change quickens, this talent is likely to become even more crucial. It will also determine the quality of learning a kid will achieve in Science, Technology, Engineering and Mathematics.

We must create and process the questions on our own to arrive at our solutions. We must understand that questions are significant and that we should pay closer attention to them, especially the meaningful ones, just as the business executive and the teacher do.

Research has shown that brainstorming using questions boosts creativity. More ideas started to flow in the form of questions due to the participants’ increased engagement and interest in the topic.Questions during such sessions are playful, disruptive and fundamentally subversive.

Divergent thinking is a process of asking questions to come up with alternative ideas. How are questions able to do this? Although scant research exists on this topic, neurologists studying creativity in the brain have extensively studied activities inside the brain during divergent thinking.

Divergent thinking mostly happens in the brain’s right hemisphere, which is the more creative part. Such thought stimulates the brain and triggers the random association of ideas. Since questioning is closely related to divergent thinking, asking a question too will have the same effect as opening up the mind.

Questions also help in directing and focusing our thinking. So, they can be used to gradually move towards convergent thinking to reach the epicentre of the problem. Kids may start with a wide-open divergent question and then use questions to converge on the solution. Questions can also be used for meta-cognitive thinking, where more questions are asked to reflect upon existing questions.

Not all inquiries result in the same advantages. More often than closed yes-or-no questions, open questions—mainly the kinds of Why, What If, and How questions that can’t be resolved with basic facts—foster creative thinking.

Why should we question the question?

Assumption-challenging questions can be helpful and even catalytic, but they can also be flawed in and of themselves. Our prejudices and assumptions might be present in the questions we pose. Asking those questions is one method of learning the answer questioning.

When people ask questions, they often rely on gut instincts and biases. Past experiences and occurrences influence what questions one decides to ask. Therefore, it is worthwhile to reflect and inquire, “Why did I ask that question.”

The act of questioning oneself, “Why am I asking why?” —could seem like a round exercise that will make you feel dizzy. However, realistic, productive approaches might help create a more intelligent or better-informed query.

They can be as essential as “the five whys” or as thorough as contextual inquiry, where we take our questions outside of our immediate environment to examine how they fare when they come into contact with reality.

The five whys approach is Japanese and is attributed to Sakichi Toyoda, the founder of Toyota industries.

It is the practice of asking why five times a row to identify the source of a particular productivity issue. Toyota used the method of 5 whys at its plants successfully for decades.

When a defective auto part, for instance, left a plant, the most straightforward response to the question of why would be given, such as that someone on the assembly line had made a mistake. Then, by asking “why” that error occurred, a root reason, such as inadequate task training, may become apparent. When the corporation asks why again, it may find that the training programme is underfunded. It may prompt the company to reconsider its primary priorities for how money should be spent and what is ultimately most important.

The Five Why’s can be used in several fields to address different issues as the value of excavation by enquiry becomes more recognised globally.

Some other ways to work on a question include altering the shape and scope of the question by broadening it to make it applicable to more people or narrowing it down.

Another method of tinkering with questions is to improve them by opening or to close them. For example, if one is faced with the question, “Why is my kid not good at Math?” This question, like the majority of Why, What If, and How questions, is open-ended since there isn’t a single correct response

But take note of what occurs when we convert this to a closed, yes-or-no query::” Is my son not good at Math?”. This question’s wording practically compels one to consider that the assumption included in the original query might not be valid.

While you may do a lot of fiddling around the margins of a question using such techniques, it’s probably best to take the question out into the world with you—and check if the premises will hold up when exposed to real people and situations. A question that appears appropriate in one case may be inappropriate in another.

There are many instances where the erroneous question is posed, based on insufficient knowledge or incorrect assumptions, frequently because the one formulating the question is often far removed from the issue. To overcome this, try to reduce the distance between the questioner and the problem.

Contextual inquiry entails asking questions directly and within the context of a situation, depending on empathy, listening, and observation to direct us toward a more insightful and successful query.

How to Create a Culture of Inquiry

Before answering the above question, we must first answer do we want a culture of inquiry.

Creating and fostering a culture of inquiry must begin at the top, with educationists, business leaders and teachers willing to ask and tolerate questions about anything.

One way to promote the culture of questioning is to build a reward system that rewards those investigating unresolved issues, conducting promising experiments, and taking calculated risks. It’s a radical idea but failed experiments often lead to subsequent innovation. Therefore, it is a good idea to reward unsuccessful experiments in the same way as successful ones if they have paved the way for valuable learning.

Similarly, it’s also essential to ensure that questioning doesn’t get punished. Often the person asking the question or pointing out the problem is asked to solve it or find the solution. Therefore, in a bid to avoid attracting the extra workload, they may stop asking questions at all.

To create a culture of inquiry, it’s also essential to encourage good questioning. Good questions arise from intensely studying and critically analysing the problem at hand. Questioning that’s irrelevant to real issues is a waste of time. Uninformed or irrelevant, off-topic questions should be avoided. There must be a willingness to build on ideas, maintain a generally positive tone of inquiry (ala appreciative inquiry), and use open-ended, inclusive language (How may we?) if creative questioning succeeds.

One feature that distinguishes us from lower primates is our capacity for verbal or nonverbal questioning. An awareness of what we don’t know is one of the main motivations for asking questions; this is a sort of higher awareness that distinguishes man from monkeys and the intelligent and inquisitive person from the dullard who doesn’t know or care.

We need to make our kids aware and comfortable with their ignorance. That’s what good questioners do. They continuously target that massive ignorance with the question spade – a skill that would help them ace STEM fields, robotics classes for kids, and coding lessons.