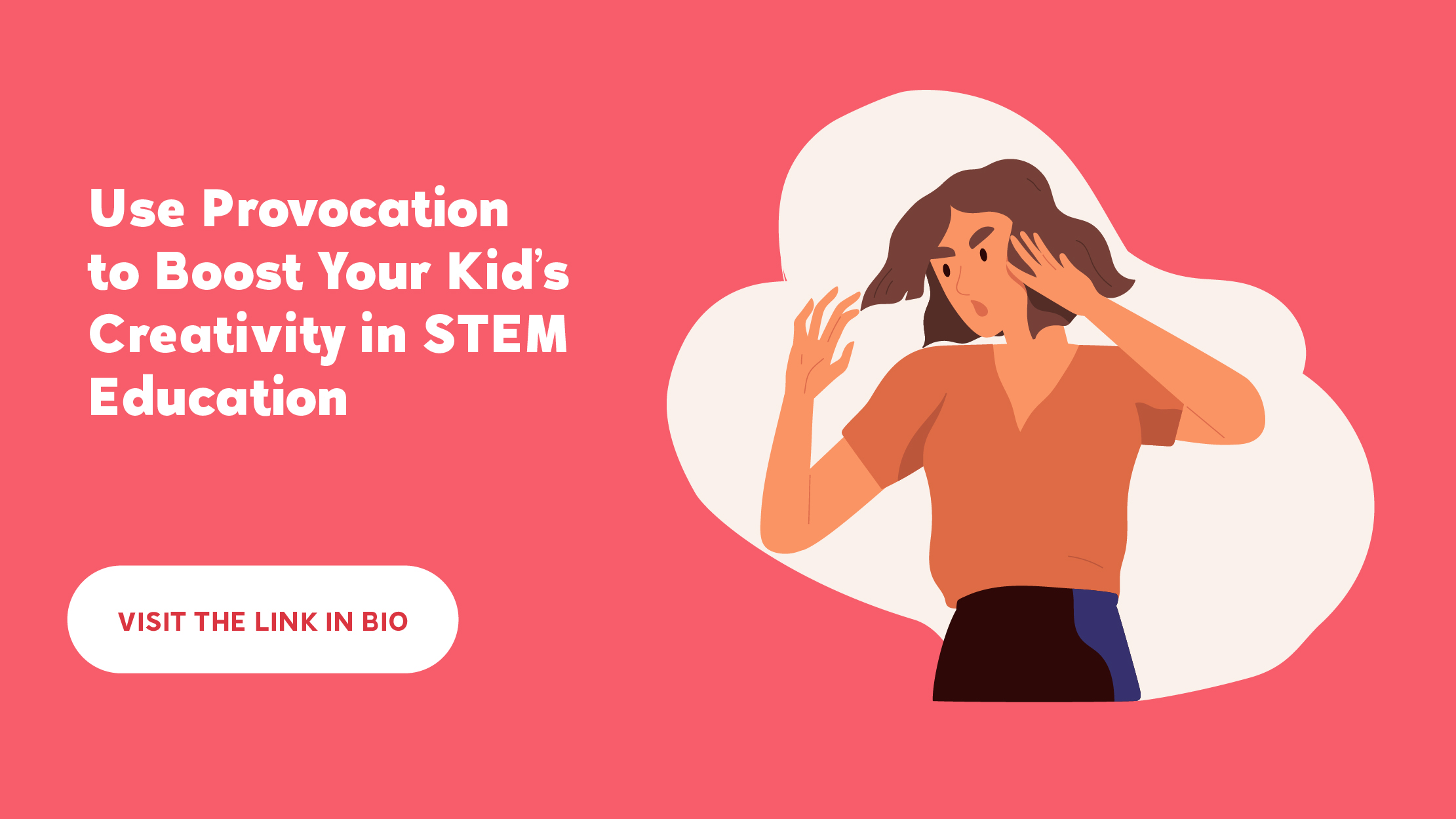 Use Provocation to Boost Your Kid’s Creativity in STEM Education

Usually, new ideas result from a discontinuity – an accident, mistake or temporary madness. They take us beyond the boundaries of reasonableness established by past experiences. Providing kids with an actionable framework for a systematic source for new ideas would create the right learning environment and help them in STEM education, coding for kids, and robotics for kids.

With provocation, we have a method for deliberate madness for a short period that can spark new ideas. It is a fundamental aspect of creativity.

For instance, consider the following statement:

Planes should land upside down.

It appears to be an illogical and crazy statement. But it could act as a springboard for creative ideas. Herein lies the definition of provocation: with provocation, there need not be a reason for saying something until after it has been said.

The usual way to think is that there must be a reason for saying something before saying it. However, with provocation, we make the statement, and the justification for the statement is decided by its effect.

At first glance, provocation may appear to be nothing more than a random strategy in which you say everything that comes to mind hoping that something might click.

Some people utilize brainstorming in a manner somewhat similar to this. Such a strategy would be ineffective and highly wasteful. There has to be a method to it.

How Does Provocation Work

Provocation works by introducing some imbalance or instability into the system. We move from the main track or usual way of thinking onto a point beyond our past experiences. From there, we move onto a side track and then find our way back to the main trail, thus opening new pathways. Creativity and humour work in the same way.

However, when we look back at the starting point (the problem) from this position and find value in the new idea or concept, it stands automatically validated. Justifying an idea in hindsight is just as valid as any other form of justification.

But why do we have to jump to the unknown and then work backwards to justify our decisions? It’s because our brains move forward in patterns based on experience. Hence, we may not even be aware of other possibilities. By working backwards, we open up additional tracks.

The objective of provocation is to help us escape from the main track of thinking and find a new point of value. While the central track signal excellence of a brain, these new pathways are necessary for creativity.

One more thing to understand about provocation is that we never seek to justify or prove a provocation. We are not trying to prove that planes will land upside down. We are trying to get to a new idea that is very different from the provocation. Provocation is only a means of getting there.

A provocation equips us with a new framework to look at things. It’s unreasonable and shakes up our thinking out of its usual channels.

However, before setting up provocation, it would also be helpful if we knew how to use them by coming back to the main track via the side track. This process of moving backwards involves a special mental operation called movement.

Movement is a mental operation that’s central to creativity. Without this skill, thinking out of the box would be impossible.

The human brain organizes any incoming information as patterns, channels or sequences. Such patterning by the brain helps us in perception and judgement. That’s how the brain works. It enables us to decipher the complex world around us.

Judgement is an essential aspect of perception. It happens continuously in an automatic and unconscious manner inside the brain.

In perception, judgement has two primary purposes. Finding, identifying, matching, or recognizing the correct pattern comes first. This almost happens by itself, but it might benefit from an intentional analysis that divides a situation into more discernible sections.

Making sure we don’t veer off course is the second function of judgement. Judgement identifies the error, the straying, the deviance, or the mismatch and hurries us back on the planned path. The rejection of incorrect beliefs is the focus of this second judgement component.

If provocations such as planes should land upside down are presented to judgement, the first instinct is to reject the idea. However, in movement, whether the idea is right or wrong is irrelevant. What’s important is where we can move from a particular concept. It’s about moving forward.

The readiness to move forward in a positive, exploratory fashion rather than pausing to determine if something is proper or incorrect is the broad definition of “movement.” The distinction is that creativity recognizes a variety of routes to success. We are interested in developing practical, functional, and sound ideas while being creative.

It’s not necessary to pass judgement each step of the way.

Some systematic techniques to use movement with provocation are:

You extract something from the provocation and move forward to work with what you have removed by building a usable idea surrounding the principle.

Focus on the Difference

Here, the provocative concept or practice is contrasted with an established notion or practice.

The differences are listed and investigated to determine if they might spark a fresh, intriguing thought. However much the provocation resembles what is already being done, an attempt is made to emphasize the differences.

Although this includes fiction, we picture the provocation being carried out. We envision what would occur “moment to moment.”

It is similar to watching a videotape to see what is happening. We are just interested in what is happening now, not the outcome. We aim to develop some intriguing concepts or ideas from this observation.

We immediately study the provocation for any advantages or good qualities. What values are currently in effect? Then, we try to advance to a new concept using this value. In this case, we are more concerned with what is happening than what the provocation might trigger.

What conditions would this provoking have a direct value in? Let’s think of provocation, such as the car’s engine should be on the roof.

A car with an engine on the roof would have immediate utility in flooded conditions since it could be driven in deeper water without harming the engine. With this technique, we search for unique situations that would make the provocation worthwhile.

Finally, we can say that these techniques appear to be concurrent and require analytical thinking. As kids are more adept at divergent thinking, creativity via provocation will also need a general attitude toward movement and systematic techniques. Attitude and practice teach kids problem-solving and enable them to be creative. They will  excel in Science, Technology, Engineering, and Mathematics, coding for kids, and robotics for kids.