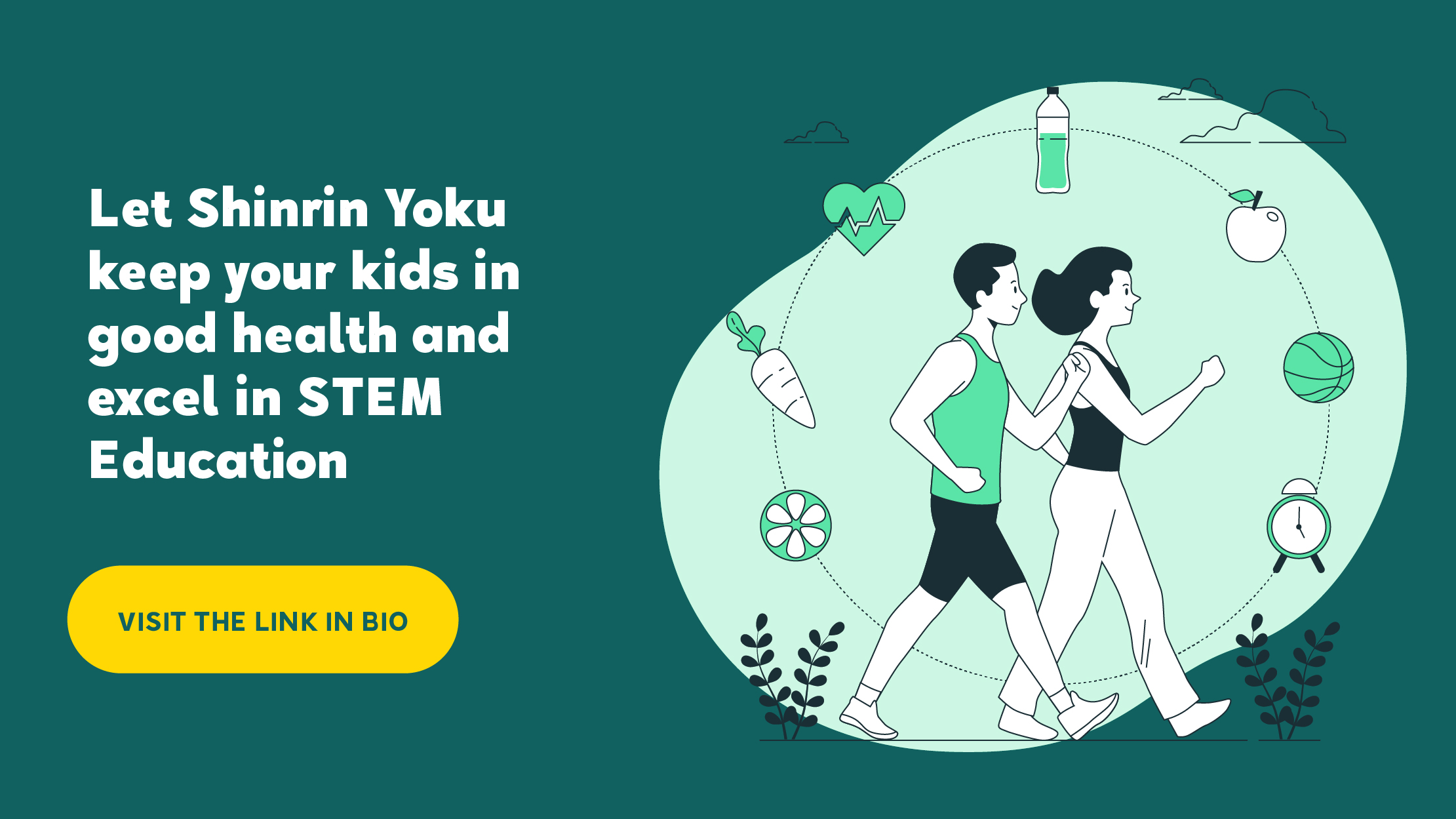 Among a wide range of outdoor STEM activities that you can consider for your kids when they are embarking on STEM education, coding for kids, and robotics for kids is a Japanese practice called Shinrin Yoku. It’s fun and educational and will keep you and teaches kids the importance of good health.

The phrase first appeared in Japanese in the 1980s to describe a physical and mental practice known as Shinrin-Yoku. Shinrin refers to forests in Japanese, and Yoku denotes “baths.” Shinrin-yoku refers to immersing oneself in the forest’s atmosphere or experiencing the forest via one’s senses. It is also known as the science of forest smells.

It is based on the ancient Buddhist practice of letting nature into the body via the five senses. This activity to unwind and calm the mind is especially helpful for kids in times of too much pressure and competition experienced in elementary schools and higher education in real world. The same applies to adults who have constant pressure to perform in the workplace.

No wonder this practice is native to Japan, known for its ruthless work culture and high suicide rates.

The Japanese soon embraced this type of ecotherapy. Researchers started looking into the physiological advantages of taking a forest bath in the 1990s, giving us the facts to back up what we already knew: spending time in nature is healthy for us.

Although the phrase “shinrin-yoku” is attributed to Japan, the fundamental idea behind the practice is not. The importance of the natural world to human health has been acknowledged for a very long time in many civilizations.

Nature is Within Us

Humans have an innate emotional affiliation to nature, and there is a term to describe this affection called biophilia.

According to the biophilia hypothesis, calm or caring aspects of nature help us reclaim our composure, mental clarity, empathy, and hope. There was always a sunset, even when there wasn’t any love, joy, or music.

The people who survived to pass on such characteristics were the ones most sensitive to the signs of nature. Biophilia explains why we continue to construct homes next to lakes today.

The Smell of Nature

The positive effects of forest baths have an underlying scientific reason. In addition to biophilia, it also has to do with the smells that trees emit.

Trees give off volatile organic substances called phytoncides, which produce a unique smell to ward off potential herbivores. A forest – a depository of countless trees has phytoncides in vast amounts. The good thing about these substances is that they are anti-bacterial and used in aromatherapy.

Research has shown that phytoncides reduce stress by around 50 per cent and help lower blood pressure.

Similarly, the smell of earth after it has rained is also something kids and adults are equally fond of. The soil smells so funky, owing to a substance called Geosmin.

It is a turbine, a family of aromatic hydrocarbons and a crucial part of natural resin, like many phytoncides (terpenes are also a significant component of hops, giving the black beer its rich flavour and aroma).

The streptomyces bacteria, essential to the production of several antibiotics, are the source of Geosmin in particular. Studies suggest we are sensitive to this rich smell, even in minimal amounts. In a pool, we can find the equivalent of seven drops of Geosmin. This sensitivity, which alerted our parched ancestors to water sources, probably constitutes a significant evolutionary adaptation.

Shinrin Yoku is about allowing the forest in and enjoying nature’s sights, sounds, and fragrances. It is a mindfulness practice that enables kids to explore nature and learn more about the science of forest smells.

The five senses hold the secret to releasing the forest’s power. Allow the natural world to enter through your hands, feet, nose, mouth, ears, and eyes. Look at the various shades of green the trees have and the sunshine that reaches the branches. Pay attention to the birds singing and the trees’ leaves rustling in the breeze.

Boosts Creativity: Research has shown a tremendous improvement of up to 50% in creative problem solving after being immersed in nature and far removed from modern technology.

Studies have shown forest bathing to be a stress buster by reducing the stress-producing hormone cortisol, thus lowering anxiety and improving moods.

During forest bathing, we breathe in the phytoncides released, which have anti-bacterial properties and help build more robust immunity. Apart from this, nature also helps in recovering from illness quickly. A study found that a view of nature through a window will help shorten the recovery time by a day compared to an urban setting.

Finally, it’s essential to understand that the practice of forest bathing can be as easy as simply going to any natural setting and being mindful of your surroundings. It is not just for those who enjoy the outdoors.

Despite the obvious benefits, there have been question-marks about what exactly makes forest bathing beneficial.  However, one running debate around the benefits of nature revolves around whether it is nature that calms us and makes us stress-free. Or is it because when in the forest, we are away from the humdrum of everyday life, and hence away from the pressures of work and the difficulties of city life such as pollution, traffic, noise etc. Whatever be the case, a healthy body in a healthy mind will certainly improve performance in science, technology, engineering and mathematics subjects for your kids.